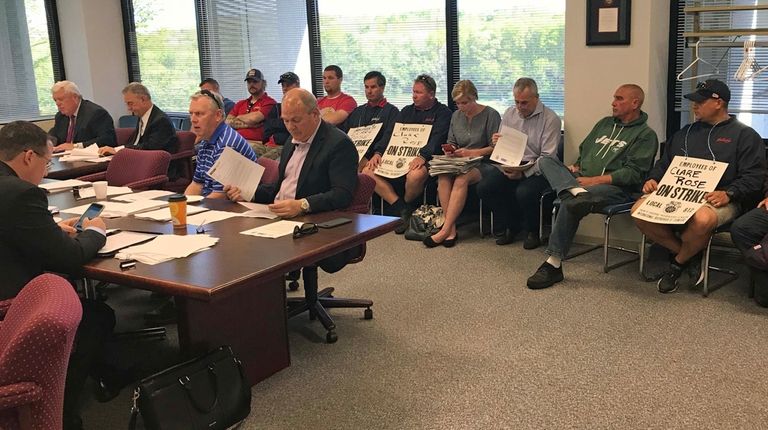 The Brookhaven supervisor Wednesday ordered the town’s Industrial Development Agency to conduct a midyear audit of employment levels at Clare Rose Inc., just hours after the agency told the beer distributor’s striking workers that it would not do such a review.

“It is possible that Clare Rose may have violated the spirit, if not the letter, of their agreement with the IDA,” Supervisor Edward P. Romaine wrote in a letter to IDA chairman Frederick C. Braun III. “I am therefore requesting a midyear review of this company to determine whether they are in compliance, and for the board to take immediate action, including clawback of benefits, if they are found to be in noncompliance.”

Romaine’s letter came after 10 Clare Rose strikers asked the IDA board during its monthly meeting to rescind tax breaks given to the Budweiser and Heineken distributor in 2009 and 2014.

The strikers, members of Local 812 of the International Brotherhood of Teamsters, said Clare Rose had violated its agreement with the IDA to employ 177 people in Brookhaven.

The strikers said they had been replaced by new hires and that the company’s payroll has shrunk since the strike started last month. More than 100 warehouse workers and delivery truck drivers are walking the picket lines.

“You have the ability to hold Clare Rose accountable,” she told the IDA board. “You have the power to deny them [tax breaks] in the future.”

Clare Rose executives didn’t attend the IDA meeting but later CEO Sean Rose said, “We are an excellent employer. . . . Our compensation packages for drivers and warehouse employees are generous beyond what is typically paid for similar positions on Long Island.”

At Wednesday’s meeting, IDA officials told the strikers that the agency couldn’t revoke the tax breaks given to the beer distributor.

“We look at the job numbers at the end of the year and they [Clare Rose] were in full compliance as of Dec. 31,” said Braun, the IDA chairman. The review is required by state law and is done by all IDAs.

IDA board member Gary Pollakusky suggested the agency audit the beer distributor’s 2017 payroll to see if it’s still in compliance with the tax breaks agreement. “If companies aren’t in compliance with job commitments there have to be consequences,” he said.

But IDA attorney Annette Eaderesto nixed a midyear audit of Clare Rose, saying all IDA projects would have to be audited at midyear. Hearing this, the board dismissed the proposal.

Supervisor Romaine’s letter came after the meeting. His spokesman said Romaine had no problem with the IDA conducting a midyear review of all its projects.

Experts said that, since the 1980s, unions have more frequently targeted government officials and agencies to put pressure on companies during strikes, said Kate Bronfenbrenner, labor education research director at Cornell University’s School of Industrial and Labor Relations: “Unions have to be creative because employers will get away with as much as they can in the current economy.”